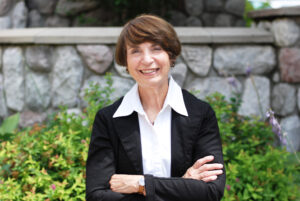 Gilda Jacobs has served as president & CEO of the Michigan League for Public Policy since 2011, following a 30-year career in public service at the local, county and state levels. Gilda has won numerous awards for her work, including being named as one of the 100 Most Influential Women in Michigan by Crain’s Detroit Business in 2016 and receiving the Michigan Food Bank Council’s Hunger-Free Award in 2015. In 2012, she participated in the Harvard Business School’s Strategic Perspectives in the Nonprofit Leadership Program. Gilda served in the state Senate for eight years after serving two terms in the Michigan House of Representatives where she made history as the first woman floor leader in either chamber of the Legislature. Prior to serving in the Legislature, she served as an Oakland County Commissioner and a Huntington Woods City Commissioner.

In addition to her civic leadership, Jacobs served as Development Director for JARC, a Jewish association providing residential care for persons with developmental disabilities. She also worked as a special education teacher in the Madison School District. Jacobs received both her bachelor’s and master’s degrees from the University of Michigan.